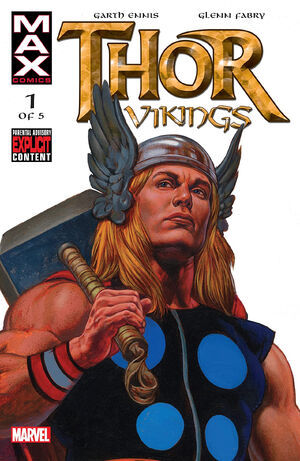 Let the Gods themselves hear my spell of damnation! Though you sail for a thousand years, o Norsemen--YOU SHALL NOT REACH THE LAND YOU SEEK!

In the year 1003 AD, the town of Lakstad, on the west coast of Norway, is raided by Harald Jaekelsson and his band of Vikings after the townspeople complain to the King over the Viking's crude behavior and theft. In a show of force, Jaekelsson and his crew kill all the men and children of the village, and have their way with the town's women, before killing them as well.

Jaekelsson, aware that his actions will brand him a renegade and a wanted man, proposes to his men that they sail West, to the fabled "New World", where their plundering won't be hindered by laws. The crew agrees, and makes preparations to set sail. But as they leave the bay, the town's wise man, having survived the chaos, calls out Jaekelsson as the son of a jackal and a coward. As the wise man cuts himself and drains the blood into a runestone, he utters a curse upon Jaekelsson and his crew, damning them to sail for a thousand years withouth their destination. Jaekelsson then shoots and kills him with a bow and arrow.

The wise man's curse would come to pass, and Jaekelsson's ship sailed endlessly through the ocean for a thousand years, until one day, the corpse-like Vikings spot land. Making their way inland, the ship docks at the South Street Seaport in Manhattan. The citizens, seeing the wooden ship and oddly dressed crew, mistake the sighting for a film shoot, until the Vikings begin slaughtering them by the dozens. As the Vikings make their way onto the city's streets, N.Y.P.D. officers confront them, to no avail, with several officers losing their lives.

As the Vikings begin burning piles of corpses in the streets, and destroying vehicles and property, Jaekelsson prepares to rape a woman he finds among the fleeing citizens. But before Jaekelsson can start, Thor appears in the sky and rescues the woman, and assures Jaekelsson and his crew that they will be sent to the underworld.