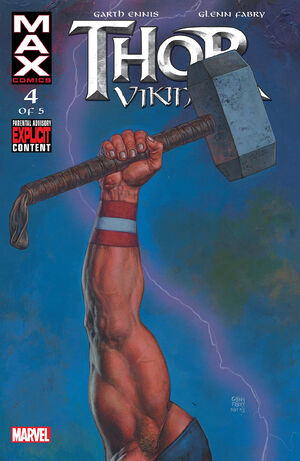 'Tis New York, Sigrid. And in all the world, and in all the heavens, there is naught one-tenth as wondrous as the sites on which thou gaze.

Appearing in "4: Fight the Good Fight"Edit

Synopsis for "4: Fight the Good Fight"Edit

As the casualties mount in the Armed Forces fight against Harald Jaekelsson's forces, Thor and Dr. Strange attempt to convince the three warriors of the past to fight with them. While Sigrid and Magnus are on board with the idea of fighting Jaekelsson, Erik expresses doubt of the story, questioning if he's hallucinating. Erik soon relents, lamenting that he'd love to fight for a good cause for once. Strange then whips up a spell using the three warrior's blood and the same rune-based magic first used by the wise man of Lakstad.

Jaekelsson, now sitting atop a throne chair made of bones at the top of the Woolworth Building, soon senses the presence of Thor. As the warriors of the past take in the awe of 21st century Manhattan, Jaekelsson's Vikings attack the group, wh0 Sigrid and Magnus quickly defeat. While his forces attack the heroes on the ground, Jaekelsson prepares his flying longship for an attack. As his crew prepares to launch, Erik passes over on a firing run, damaging the longship and sending a number of the Vikings plummeting to the ground below.

With the ground forces defeated, Thor, Magnus and Sigrid make their way to Jaekelsson.