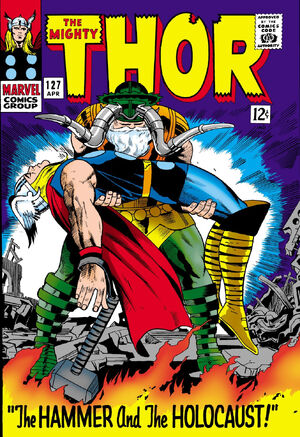 Appearing in "The Hammer and the Holocaust!"Edit

Synopsis for "The Hammer and the Holocaust!"Edit

Synopsis for "Tales of Asgard: The Meaning of Ragnarok!"Edit

Odin has summoned Thor and his crew back to Asgard to prepare for the coming of Ragnarok. In order for his people to properly understand what is to come, Odin has the prophet known as Volla reveal her prophesies of the coming cataclysm:

She speaks of a coming blizzard, and how the people of Asgard would become savage and battle one another, and how Loki amass an army of trolls and demons to attack Asgard. This battle would lead to the destruction of the Bifrost Bridge, and a massive battle in Asgard between an army led by Thor, and the opposing forces of Loki and his minions.

So fierce would be this battle that all of Asgard would crumble, and the end would be marked by the coming of the Midgard Serpent, rising from the depths to consume all that is left.

Retrieved from "https://heykidscomics.fandom.com/wiki/Thor_Vol_1_127?oldid=1718736"
Community content is available under CC-BY-SA unless otherwise noted.