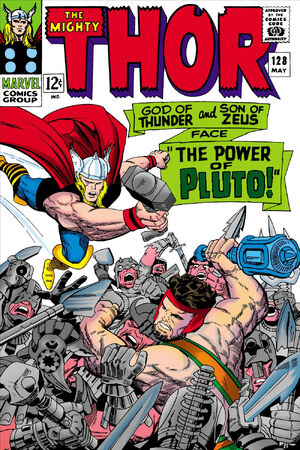 Appearing in "The Power of Pluto!"Edit

Synopsis for "The Power of Pluto!"Edit

Synopsis for "Tales of Asgard: Aftermath!"Edit

Odin continues telling Thor, Balder, Loki, and the Warriors Three of the prophesies of Volla about the coming of Ragnarok. According to Volla's visions Loki would stage a revolt against Asgard which would lead to a great war that would destroy their entire kingdom. In the end the Midgard Serpent would destroy Asgard, leaving nothing but a ruined wasteland. Following this, Surtur the Fire God would rise from his realm and set the realm of Asgard ablaze. However in spite of all this destruction, life would soon restart itself in Asgard, with the restoration of life and eventual advancement to it's former state.

With his story finish, Odin asks all gathered what they think about the visions. Loki, defiant as ever, speaks out telling Odin that he doesn't believe the old womans claims and that they are foolish. Odin, however, believes every word and reiterates the fact that Loki will be the cause of Ragnarok.

Retrieved from "https://heykidscomics.fandom.com/wiki/Thor_Vol_1_128?oldid=1632683"
Community content is available under CC-BY-SA unless otherwise noted.