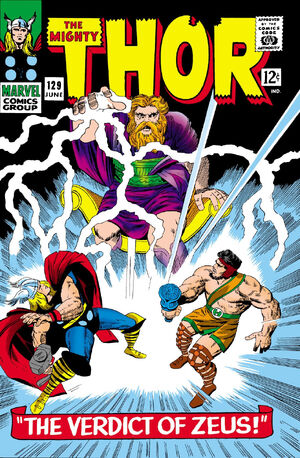 Appearing in "The Verdict of Zeus!"Edit

Synopsis for "The Verdict of Zeus!"Edit

Synopsis for "Tales of Asgard: The Hordes of Harokin!"Edit

Because Loki is the root cause of Ragnarok according to the prophesies of Volla, Odin has his step-son tossed into the Well of Eternal Sleep, thereby preventing the coming of Ragnarok.

In order to further prevent Ragnarok from happening, Odin calls for Thor and the Warriors Three. He tells the quartet to go to the realm of Muspelheim and retrieve the Warlock Eye from the Temple of Mystics as it too was prophesied to be used to bring about Ragnarok.

As fate would have it, in Muspelheim, the Warlock Eye has been taken by the deceased warrior known as Harokin. Harokin plots to use the Eye to first take over Muspelheim and then the rest of Asgard. He uses the Eye's power to easily dismantle opposing forces against him in Muspelheim. As this battle rages on, Thor and the Warriors Three begin their journey to collect the Eye unaware of the danger they do face.

Retrieved from "https://heykidscomics.fandom.com/wiki/Thor_Vol_1_129?oldid=1632684"
Community content is available under CC-BY-SA unless otherwise noted.