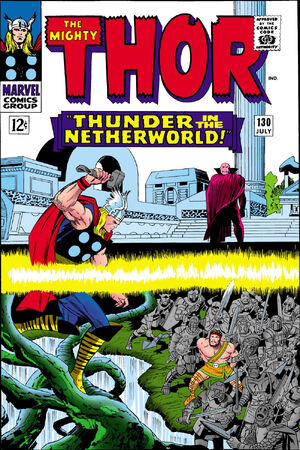 Appearing in "Thunder in the Netherworld!"Edit

Synopsis for "Thunder in the Netherworld!"Edit

Synopsis for "Tales of Asgard: The Fateful Change!"Edit

Thor and the Warriors Three have travelled into the realm of Muspelheim in order to recover the Warlock Eye, however they find that the Eye has been taken by Harokin who intends to use the Eye to take over Muspelheim and then Asgard itself.

The four warriors battle against Harokin's forces, and during the battle Thor himself sneaks into Harokin's chambers and easily subdues his opponent in combat. Thor finds no trace of the Warlock Eye, and knows that the only person who would is the now unconscious Harokin.

However, Thor notices that he and Harokin have a striking resemblance and so he changes into some of Harokin's clothing. When Harokin's men come to the chamber to warn him of the attack in progress it is Thor (disguised as Harokin) who answers and orders the men to bring the Warlock Eye.

Retrieved from "https://heykidscomics.fandom.com/wiki/Thor_Vol_1_130?oldid=1718739"
Community content is available under CC-BY-SA unless otherwise noted.