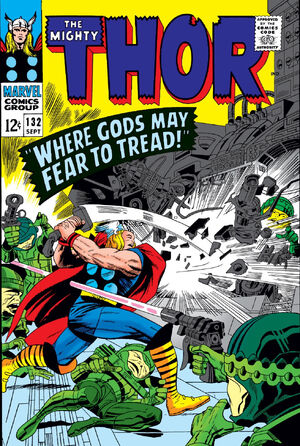 Appearing in "Rigel - Where Gods May Fear to Tread!"Edit

Synopsis for "Rigel - Where Gods May Fear to Tread!"Edit

Synopsis for "Tales of Asgard: The Dark Horse of Death!"Edit

With the defeat of Harokin and his army and the Warlock Eye in their possession, Thor and the Warriors Three take rest while they prepare to return to Asgard. As they wash up and tend to their wounds, the four warriors are alerted by the sound of beating drums.

Going to investigate they learn that it is the call heralding the arrival of the Stallion of Doom, who has come to take one warrior to the land of the dead. As the people in the village flee from the horses approach, Thor and the Warriors Three go to see Harokin who is still being treated for his wounds.

They surmise that the Stallion has come for Harokin, who is more than willing to accept his fate following his defeat. Almost in answer to this, they soon find that the Stallion of Doom waits outside of Harokin's room for him to take his final ride off into the realm of the dead.

Retrieved from "https://heykidscomics.fandom.com/wiki/Thor_Vol_1_132?oldid=1718740"
Community content is available under CC-BY-SA unless otherwise noted.