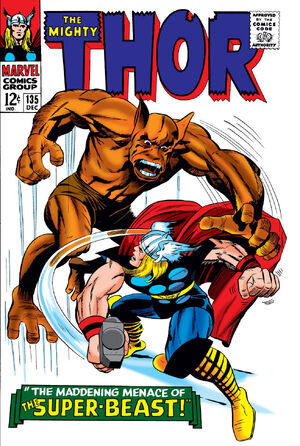 Appearing in "The Maddening Menace of the Super-Beast!"Edit

Synopsis for "The Maddening Menace of the Super-Beast!"Edit

Synopsis for "Tales of Asgard: The Fiery Breath of Fafnir!"Edit

Thor, Fandral and Hogun have woken to find that Volstagg is missing and begin searching for their comrade.

What they find is the dragon known as Fafnir, a creature that was banished to the realm of Nastrond by Odin himself. The creature vows that after he destroys Thor, Hogun and Fandral that he will attack Asgard and get vengeance for his long ago defeat. Naturally, Thor and the others counter attack, giving no quarter against their foe in spit of the monsters seemingly superior strength and mystical abilities.

Watching all this from Asgard is Odin himself, Odin bequaths that the only way that the realm of Nastrond can flourish and thrive again is with the destruction of Fafnir.

Retrieved from "https://heykidscomics.fandom.com/wiki/Thor_Vol_1_135?oldid=1632690"
Community content is available under CC-BY-SA unless otherwise noted.