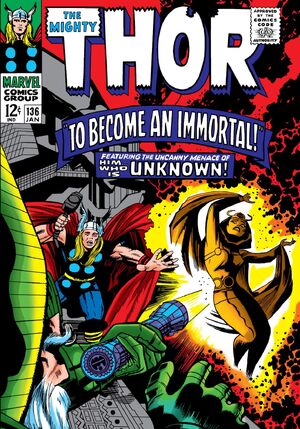 Appearing in "To Become an Immortal!"Edit

Synopsis for "To Become an Immortal!"Edit

Synopsis for "Tales of Asgard: There Shall Come a Miracle!"Edit

Thor, Hogun and Fandral continue their fight with Fafnir the dragon. As the battle rages, Thor cracks open the round with his hammer causing the dragon to fall to it's doom. With the creature seemingly killed, Thor and the others fight through the unstable land, braving both storm and earthquake alike.

They find an imprisoned Volstagg and free him from his cage and the four warriors ride out of Nastrond as the storm reaches it's climax.

Witnessing the situation from Asgard, Odin points out to his council that with the death of Fafnir, the realm will now begin to flourish and grow new life, as identified when Odin spots new plant life growin where Fafnir fell in battle.

From Marvel Database, a Wikia wiki.
Retrieved from "https://heykidscomics.fandom.com/wiki/Thor_Vol_1_136?oldid=1718744"
Community content is available under CC-BY-SA unless otherwise noted.