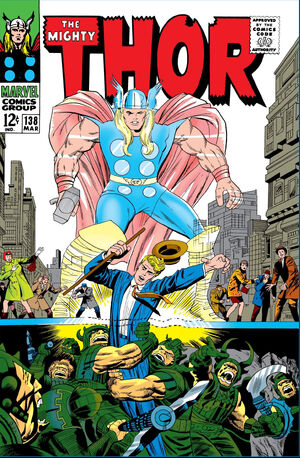 Appearing in "The Flames of Battle!"Edit

Synopsis for "The Flames of Battle!"Edit

Synopsis for "Tales of Asgard: The Quest of the Mystic Mountain!"Edit

Seeking to get revenge against Mogul for slaying his peopel, Hogun and his friends Thor, Fandral and Volstagg seek out the Wazir, a prophet who knows the location of Mystic Mountain, the home of Mogul. In order to get to the Wazir however, they have to get past the cyclops known as Ogur. However, Ogur will not let them pass without a fight and attacks the four warriors. After a brief battle, Thor and the Warriors Three manage to battle Ogur into submission until the Wazir -- roused from his meditations by the din of battle -- comes from his cavern to know what the commotion is.

Hearing of the warriors plea to be transported to Mystic Mountain, the Wazir agrees to teach them the location. He has Thor, Fandral and Hogun hold his wooden staff and they suddenly are imparted with the knowledge of Mystic Mountains location. Leaving the Wazir's cavern, they find Volstagg, whom they left out on watch, fast asleep. However, when the rouse the sleeping warrior, he claims that he was putting on a ruse for any attacker who might happen by.

Retrieved from "https://heykidscomics.fandom.com/wiki/Thor_Vol_1_138?oldid=1718746"
Community content is available under CC-BY-SA unless otherwise noted.