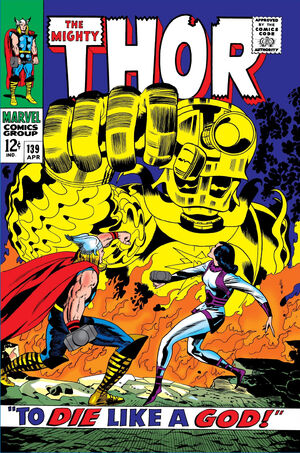 Synopsis for "Tales of Asgard: The Secret of the Mystic Mountain!"Edit

Sending away his evening entertainment, Mogul learns from his adviser that Thor and the Warriors Three are seeking out the location of Mystic Mountain so that Hogun may get revenge against Mogul for killing his people. Mogul scoffs at this foolishness, confident that his Jinni Devil will be adequately powerful to stop them from achieving their goal.

Meanwhile, Thor and the Warriors Three arrive at the location where the Wazir told them that Mystic Mountain can be found, however all they find is a baron clearing. This upsets Hogun who believes that they have been tricked, however Thor does not believe so. Thor quickly strikes the ground with his hammer, cracking open the ground and revealing the location of Mystic Mountain's central city (Zanadu) is actually hidden beneath the ground.

Breaking the glass barrier around the city, Hogun leads the others towards the newly made opening, however before they can enter the city of Zanadu, they are confronted by the Jinni Devil who welcomes the heroes to their doom.

Retrieved from "https://heykidscomics.fandom.com/wiki/Thor_Vol_1_139?oldid=1718747"
Community content is available under CC-BY-SA unless otherwise noted.