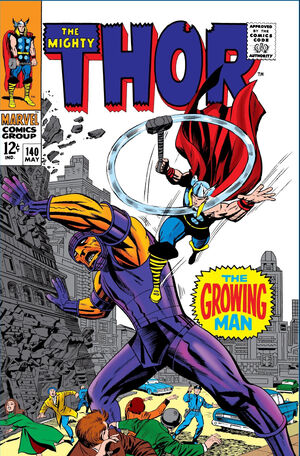 Appearing in "The Growing Man"Edit

Synopsis for "The Growing Man"Edit

Synopsis for "Tales of Asgard: The Battle Begins!"Edit

Having found an entry way into the land of Zanadu to get revenge against Mogul, the ruler of Mystic Mountain for his eradication of Hogun's people, Thor and the Warriors Three must fight against Mogul's defender the evil Devil Jinni.

Although the Jinni has superior mystical powers, Thor and the Warriors Three are more than a match for the evil Jinni and are able to best it in combat. Furious over his slaves inability to stop the intruders, and deciding to take matters into his own hands, Mogul uses a casts a spell that destroys the Devil Jinni.

With their latest obstacle out of their way, Hogun leads the others into the city of Zanadu in hopes of facing Mogul one-on-one.

Retrieved from "https://heykidscomics.fandom.com/wiki/Thor_Vol_1_140?oldid=1718558"
Community content is available under CC-BY-SA unless otherwise noted.