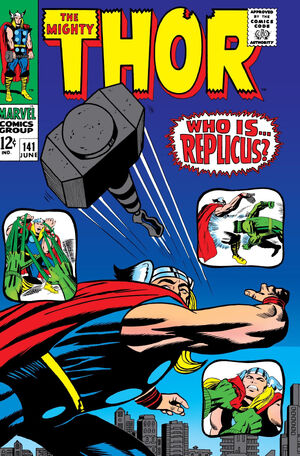 Appearing in "The Wrath of Replicus"Edit

Synopsis for "The Wrath of Replicus"Edit

Synopsis for "Tales of Asgard: Alibar and the Forty Demons!"Edit

With the defeat of the Devil Jinni by Thor and the Warriors Three, panic has spread across the land of Xandu, as it's people fear the warriors wrath for Mogul's attack on Hogun's people. As Thor and the others fight through the armies of Xandu, Modgul is presented a thief named Alibar.

At first, the tyrant wishes to kill the young thief, however instead finds another use for him. Mogul uses his magical powers to transform Alibar into the leader of his army of warriors he calls Satan's Forty Horsemen, whom he summons and unleashes upon Thor and the Warriors Three.

Retrieved from "https://heykidscomics.fandom.com/wiki/Thor_Vol_1_141?oldid=1632696"
Community content is available under CC-BY-SA unless otherwise noted.