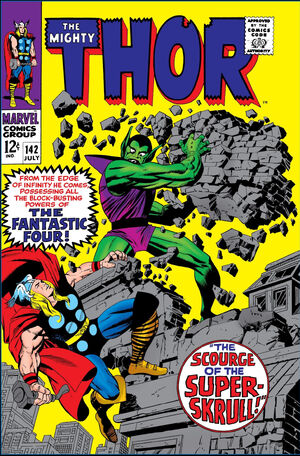 Appearing in "The Scourge of the Super Skrull!"Edit

Synopsis for "The Scourge of the Super Skrull!"Edit

Synopsis for "Tales of Asgard, Home of the Mighty Norse Gods: We, Who Are About to Die...!"Edit

In response to Thor and the Warrior Three's invasion of Xandu, Mogul has unleashed his elite army Satan's Forty Horsemen. The warriors arrive and Mogul also uses a cannon that sends raining fire that send a swath of destruction across the land and terror among the people of Xandu.

As the warriors ride out to meet their foes, Mogul also has his servants mix up a potion that will cause the dreaded Spotted Plague, a disease so deadly it can kill an entire tribe of people. Satisfied that the potion will work, Mogul leaves his palace on his flying carpet to watch over the battle between Thor, the Warriors Three and his Forty Horsemen, plotting to use it against Thor and the others should his horsemen fail.

Not far away, Thor and the Warriors Three have just finished fighting off the regular army of Mogul when they witness the coming of the Forty Horsemen and prepare themselves for battle.

Retrieved from "https://heykidscomics.fandom.com/wiki/Thor_Vol_1_142?oldid=1718559"
Community content is available under CC-BY-SA unless otherwise noted.