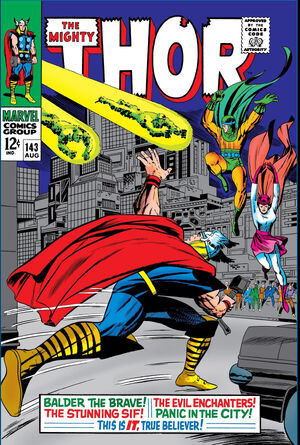 Appearing in "And Soon Shall Come the Enchanters!"Edit

Synopsis for "And Soon Shall Come the Enchanters!"Edit

Synopsis for "Tales of Asgard: To the Death!"Edit

As Thor, Fandral and Balder prepare to battle Satan's Forty Horsemen, demonic warriors under Mogul's rule, Volstagg has met Mogul's sister the seductive Shezada. The cowardly Volstagg attempts to charm Shezada into allowing him to speak with Mogul, however the evil Shezada has other ideas and attempt to send Volstagg down a pit, however at the last moment Volstagg grabs the girl taking her down with him.

They find themselves in the underworld realm of the bull like Mutaurus who stalks the two intruders. Knowing how to defeat Mutaurus, Shezada leads Volstagg to the creatures throne room where they secure the Rod of Wonderous Wizard Power, a magical weapon which Volstagg uses to seemingly slay the beast.

While elsewhere in Xandu, Thor, Fandral and Hogun continue their fight against the Forty Horsemen, accepting no quarter and battling on.

This issue is reprinted in Origins of Marvel Comics.

Retrieved from "https://heykidscomics.fandom.com/wiki/Thor_Vol_1_143?oldid=1718748"
Community content is available under CC-BY-SA unless otherwise noted.