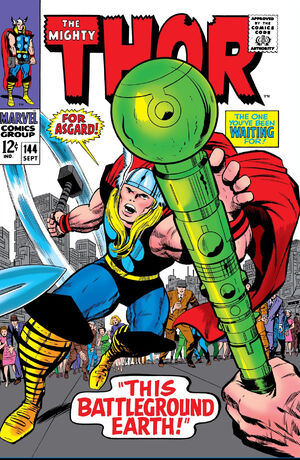 Appearing in "This Battleground Earth!"Edit

Synopsis for "This Battleground Earth!"Edit

Synopsis for "Tales of Asgard: The Beginning of the End!"Edit

As Thor, Fandral, and Hogun continue their fight against the demonic warriors of Mogul, they are joined by Alibar, who has decided to denounce Mogul as his master and help the three Asgardians fight off the demonic army.

As the battle rages, Mogul plots to use a potion containing the Spotted Plague to kill his opponents should they manage to succeed in defeating his armies. When the final army flank of Mogul's army races to meet Thor and the others, they are instantly destroyed in a single blast fire by Volstagg who has just arrived with the Rod of Wonderous Wizard Power.

Retrieved from "https://heykidscomics.fandom.com/wiki/Thor_Vol_1_144?oldid=1718749"
Community content is available under CC-BY-SA unless otherwise noted.