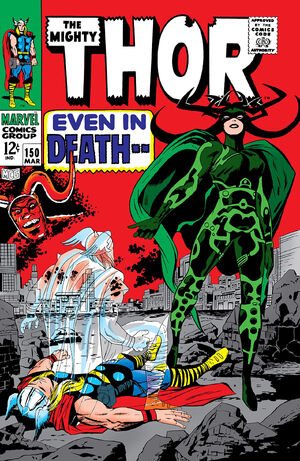 Appearing in "Even in Death..."Edit

Synopsis for "Even in Death..."Edit

The aquatic Inhuman Triton has grown restless, and decides to leave the hidden city of Attilan. Several days of swimming bring him to a tropical island, where he sees a strange creature attacking a human female. He rushes to her rescue only to interrupt a monster movie being filmed there. Believing that the diving cameramen are hie enemies, Triton attacks. He is shot with a tranquilizer gun and taken prisoner. Held in a glass water tank as they sail to New York, Triton wonders what will happen when the world learns of his power.

Retrieved from "https://heykidscomics.fandom.com/wiki/Thor_Vol_1_150?oldid=1632705"
Community content is available under CC-BY-SA unless otherwise noted.