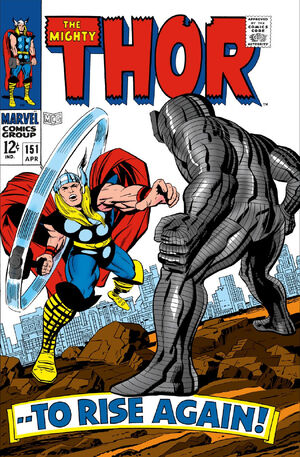 Appearing in "To Rise Again!"Edit

Synopsis for "To Rise Again!"Edit

Synopsis for "Inhuman At Large"Edit

Captured by a human film crew, Triton has been taken in a glass water tank to New York city. As the ship approaches the harbor, one of the sailors says he hoped they have a strong enough cage waiting to hold Triton. Not willing to be caged, Triton breaks out of the tanks and tries to escape. Surrounded by the film crew, a battle follows. During the fight, Triton uses his great strength to tear down the ships's mast. Frightened, the crew abandons ship.

Triton, jumping from the ship as it explodes, swim towards shore wanting to learn more about humans so that he can prepare the other Inhumans for the day when they most meet humans.

Retrieved from "https://heykidscomics.fandom.com/wiki/Thor_Vol_1_151?oldid=1718756"
Community content is available under CC-BY-SA unless otherwise noted.