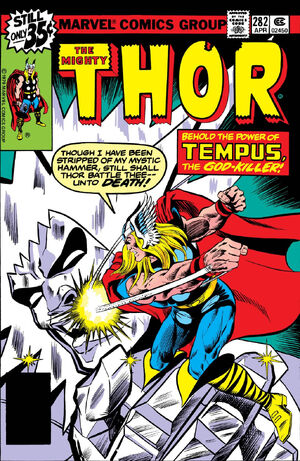 Appearing in "Rites of Passage"Edit

Synopsis for "Rites of Passage"Edit

Mjolnir is no longer capable of time travel. As later revealed in Avengers Forever #8, the entire scenario with the "dying planet of Phantus" was concocted as Immortus's plan to trick Thor into depriving the Avengers of their main means of time travel.

Retrieved from "https://heykidscomics.fandom.com/wiki/Thor_Vol_1_282?oldid=1633580"
Community content is available under CC-BY-SA unless otherwise noted.