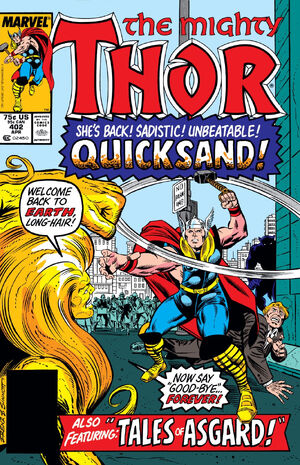 Appearing in "Even an Asgardian Can Die!"Edit

Synopsis for "Even an Asgardian Can Die!"Edit

Synopsis for "Tales of Asgard: The Golden Hair of Glimda"Edit

Jealous of praises from everyone in Asgard, Loki sets out his revenge on Glimda. Odin finds out and tries to punish Loki, but before the punishment can be dealt Thor steps in and offers a solution which only fuels Loki's hatred for Thor.

Retrieved from "https://heykidscomics.fandom.com/wiki/Thor_Vol_1_402?oldid=1728309"
Community content is available under CC-BY-SA unless otherwise noted.