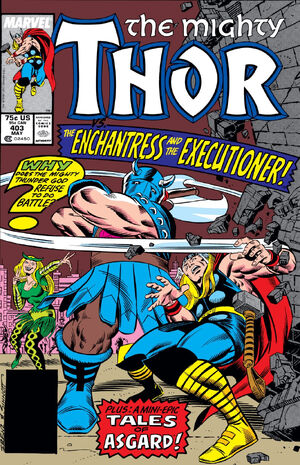 Appearing in "When the Executioner Calls!"Edit

Synopsis for "When the Executioner Calls!"Edit

Synopsis for "Tales of Asgard: The Wolves of Ravenswood!"Edit

A pack of wolves is ravaging the countryside. Haaken gathers a posse to go after them. Thor wants to go, and Loki tricks him into it and gives him a faulty sword. Thor manages to hold off the wolves long enough for Haaken to save them, along with a very young Sif.

Retrieved from "https://heykidscomics.fandom.com/wiki/Thor_Vol_1_403?oldid=1633702"
Community content is available under CC-BY-SA unless otherwise noted.