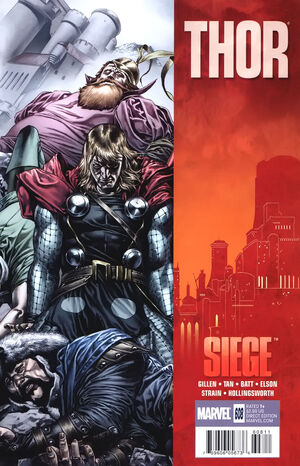 SIEGE BLOCKBUSTER TIE-IN!! War has often come to Asgard before…but never like this! As the Shining City suffers the most brutal earthly attacks in its history, Thor and his allies fight to stay alive and save what they can! Might be a lost cause…The critically acclaimed breakout THOR run by Kieron Gillen (DARK AVENGERS: ARES) and Billy Tan (NEW AVENGERS) barrels on strong and takes turns you won’t want to miss!

Retrieved from "https://heykidscomics.fandom.com/wiki/Thor_Vol_1_608?oldid=1769734"
Community content is available under CC-BY-SA unless otherwise noted.