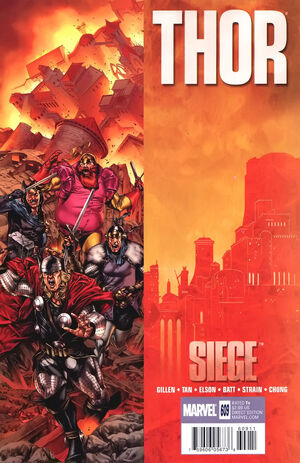 SIEGE BLOCKBUSTER TIE-IN!! The Siege brings Ragnarok to Asgard! The Shining City of Thor and his brothers in arms faces destruction on the greatest scale it’s ever suffered, at the hands of Norman Osborn and his Dark Avengers. But the Norse heroes have bigger problems, when THOR fights THOR! The evil Thor clone has come to kill the God of Thunder and take his place. Even if Asgard survives the Siege…will Thor survive Ragnarok?!

Retrieved from "https://heykidscomics.fandom.com/wiki/Thor_Vol_1_609?oldid=1650584"
Community content is available under CC-BY-SA unless otherwise noted.