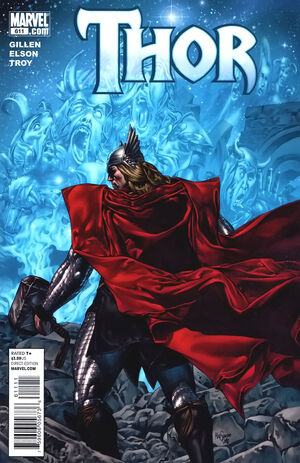 All new creative team! The perfect jumping-on point! A bold new era for THOR begins under writer Matt Fraction and artist Pasqual Ferry! In the wake of SIEGE, Asgard must take its proper place as the Golden Realm, most glorious of the nine worlds of myth. But that means Thor's home isn't just a beacon...it's a target! And what happens to the Asgardians and the denizens of all nine worlds -- including Earth! -- when a dark, destructive force from another reality comes on the warpath?

Retrieved from "https://heykidscomics.fandom.com/wiki/Thor_Vol_1_611?oldid=1650586"
Community content is available under CC-BY-SA unless otherwise noted.