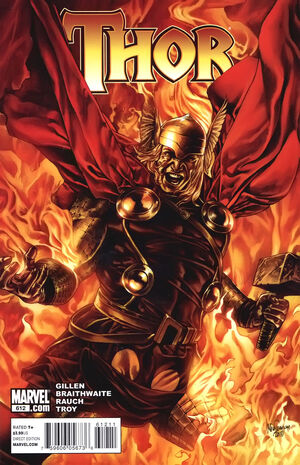 Thor goes to Hell! In the aftermath of SIEGE, heavy metal horror and adventure! Fan-favorite writer Kieron Gillen continues his bestselling and critically acclaimed THOR run, reteamed with Doug Braithwaite. A lingering menace created by fiendish Loki as an afterthought returns to wreak havoc on the Asgardians! Can Thor and his unlikely allies defeat this devastating force of destruction?! Or in their weakened state after the battles of Siege, will this new, ancient enemy prove too strong?

Retrieved from "https://heykidscomics.fandom.com/wiki/Thor_Vol_1_612?oldid=1650587"
Community content is available under CC-BY-SA unless otherwise noted.