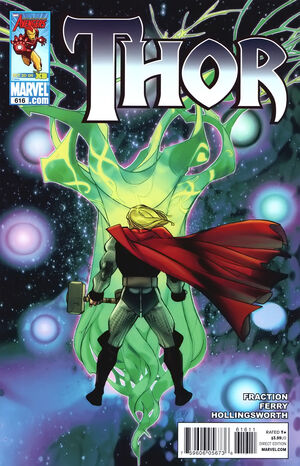 What kind of hell is coming for Asgard? What does Asgard’s presence on earth mean? Only one man knows for sure and he can’t get anyone to take him seriously. The reconstruction of his fallen city are first and foremost in the God of Thunder’s mind as an evil more terrifying than even he could imagine comes roaring down the World Tree. The Dark Gods are coming for Asgard. Here is blood! Here is thunder! HERE IS THE MIGHTY THOR!

Retrieved from "https://heykidscomics.fandom.com/wiki/Thor_Vol_1_616?oldid=1650591"
Community content is available under CC-BY-SA unless otherwise noted.