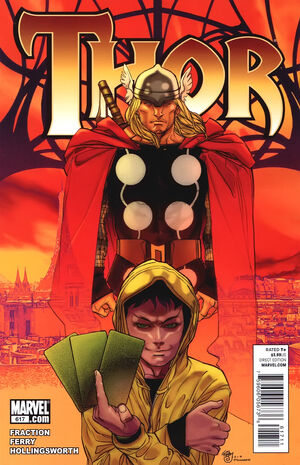 THE WORLD EATERS continue their rampage down the World Tree on an unstoppable blitz to Asgard. The magnificient residents of the nine worlds flee their rampage... coming to Asgard for protection. Can the Fallen City protect the exiles of seven worlds from an unimaginable evil? And what on earth is Thor doing in Paris? And who has he found there...? You wouldn't believe us if we told you.

Retrieved from "https://heykidscomics.fandom.com/wiki/Thor_Vol_1_617?oldid=1651278"
Community content is available under CC-BY-SA unless otherwise noted.