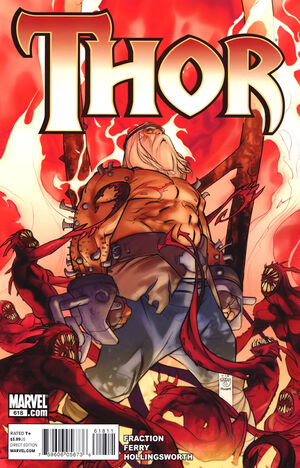 Cover your ears and gird your loins for the four-letter word that changes everything for Thor, for Asgard and for Earth: O D I N. And you won't believe who Ol' One Eye brings back with him. On top of THAT, the God of Thunder has to deal with the ramifications of reincarnating Loki, the least of which are that the God of Tricks has taken a form no one saw coming. And if that wasn't enough, the town of Broxton has to deal with the refugees of nine worlds, on the run and terrified as THE WORLD EATERS continue their trans-universal rampage of madness...!

Retrieved from "https://heykidscomics.fandom.com/wiki/Thor_Vol_1_618?oldid=1650593"
Community content is available under CC-BY-SA unless otherwise noted.