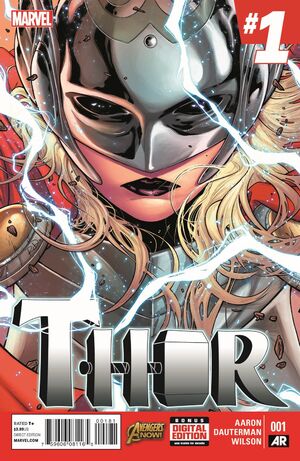 There must always be a Thor.

Appearing in "If He Be Worthy"Edit

• The great hammer MJOLNIR lies on the moon, unable to be lifted by anyone in all the heavens! Even THOR!

• Something dark has befallen the God of Thunder, leaving him weakened and for the first time in forever... UNWORTHY!

• But when Frost Giants invade the Earth, the hammer will be lifted and an all-new Thor will arise! A Thor unlike any we've ever seen before!

• Who is this new GODDESS OF THUNDER? Not even Odin knows!

Retrieved from "https://heykidscomics.fandom.com/wiki/Thor_Vol_4_1?oldid=1464648"
Community content is available under CC-BY-SA unless otherwise noted.