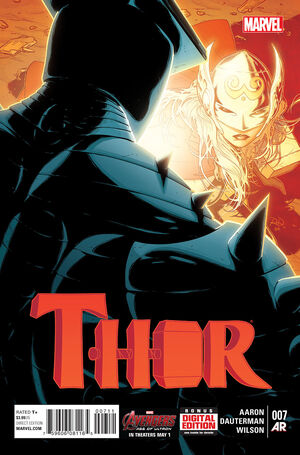 Appearing in "The Battle For The Hammer"Edit

Synopsis for "The Battle For The Hammer"Edit

Agent Phil Coulson calls Agent Roz Solomon from the Helicarrier. She's in the middle of a firefight with security personnel on Roxxon Island. Solomon is supposed to be on paid vacation, but Coulson, seeing an alert notice that Roxxon is reporting a break-in at one of their facilities, quickly figures out what she's doing. Solomon evades the security team and makes it back to her flying car, while reporting to Coulson on Roxxon's illegal underground toxic waste dump. Coulson informs her that he lost Mjolnir, but S.H.I.E.L.D. doesn't have all the details yet. Solomon takes her flying car to the Blue Area of the Moon and finds Mjolnir sitting on its surface. The phone call with Coulson breaks up, and Solomon looks up at the Earth. She reflects on Earth's beauty and how powerless it sometimes feels to fight for it when evil companies like Roxxon grow more powerful. She wishes aloud for something 'big' to tip the scales, and her gaze falls on Mjolnir.

Back on Roxxon Island, Thor faces off with the Destroyer armor. They fall from Roxxon Island to the oil fields below, and the Destroyer, possessed by Cul Borson, seizes Mjolnir. Lying on the floor of Odin's throne room on Asgard, Cul tells Odin he has the hammer. Odin directs Cul to bring him the hammer, but to first teach Thor a lesson.

Somewhere in the skies of Midgard, Odinson hears Freyja call for him telepathically. She uses the Bifrost to teleport to him and informs him that in order to right Odin's wrongs, they'll need an army to face the powerful foe he unleashed. Odinson pulls out his list of potential candidates for Thor's true identity, and suggests they use the Rainbow Bridge to summon them.

On Roxxon Island, Agger confirms there are no intruders left on the premises and orders his personnel to move the island out of the area. Malekith suggests they seal their deal the proper 'Dark Elf' way, through bloodshed, while Agger gets to see some of the realms he's purchasing. He teleports them both to Aflheim. Agger transforms into his minotaur form and they begin slaughtering Light Elves.

Meanwhile, Thor continues to battle the Destroyer, who still holds her hammer. Using all her might, Thor summons the hammer back to her, directing it to destroy all the oil drill systems and tanks in the process. Silently vowing that the Destroyer will not be her death, Thor readies herself for another attack. Cul reveals that he's the one controlling the Destroyer armor. Suddenly, Odinson and Freyja teleport onto the battlefield via the Bifrost. They both declare their support to the Thor, along with the small army they assembled: Angela, Black Widow, Captain Marvel, Hildegard, Idunn, Karnilla, Kelda, Lady Sif, Scarlet Witch, Spider-Woman, and Valkyrie.

• BEHOLD, THE ALL-NEW THOR VS. THE UNSTOPPABLE MACHINE OF DEATH AND DESTRUCTION THAT IS... THE DESTROYER.

Retrieved from "https://heykidscomics.fandom.com/wiki/Thor_Vol_4_7?oldid=1646524"
Community content is available under CC-BY-SA unless otherwise noted.