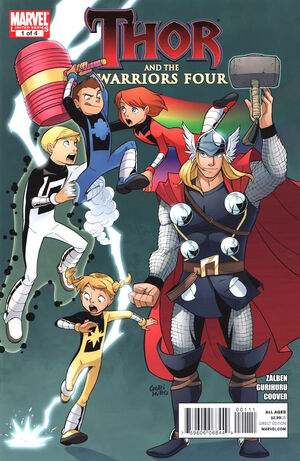 It all starts here! Power Pack’s biggest adventure ever begins, as they desperately search for the only person who can save the life of their grandmother – THE MIGHTY THOR! But first, they’re going to need to get to Asgard, and that means joining forces with Frog Thor...And THE PET AVENGERS! An epic tale that starts with a book of myths and ends with the destruction of the entire world, this is a journey into mystery that will leave Power Pack changed – forever!

Appearing in "The Twelve Labors of the Babysitter, Part 1"Edit

Synopsis for "The Twelve Labors of the Babysitter, Part 1"Edit

Retrieved from "https://heykidscomics.fandom.com/wiki/Thor_and_the_Warriors_Four_Vol_1_1?oldid=1471521"
Community content is available under CC-BY-SA unless otherwise noted.