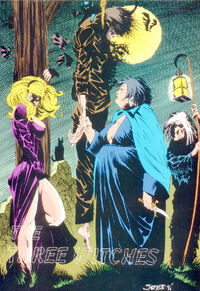 Official Team Name
The Kindly Ones

Team Aliases
The Hecatae; the Erinyes; the Fates; the Three Witches; the Norns; the Three-in-One; Mut; Moirai; Eumenides; the Furies; Parcae; Fortuna; the Charities

Base of Operations
Unknown
Affiliations

Not much is known of the mysterious triad (in actuality, one being with three aspects) known as the Kindly Ones or the Three Witches. In fact, the three have many different forms. One form, known as the Hecateae, is a trio of three spirits who can foretell the future and see where lost people or things are located. Another incarnation is as the Kindly Ones, who bring down their wrath upon those who have spilled family blood.

Individually, the three personas of the Kindly Ones are commonly known by the names Cynthia, Mildred and Mordred (or Morgan). Regardless of incarnation, they manifest as three women of different ages: young Cynthia, middle-aged Mildred, and elderly Mordred. In their common guise as the Three Witches, the Kindly Ones are storytellers who have often associated with Cain and Abel. They often held competitions to see which of the three was the best storyteller, forcing unlucky mortals to judge.

The Hecateae are summoned with several items, namely: honey, a snake, a gallows, and a black she-lamb at a crossroads under a crescent moon at midnight.

Retrieved from "https://heykidscomics.fandom.com/wiki/Three_Witches?oldid=1676187"
Community content is available under CC-BY-SA unless otherwise noted.