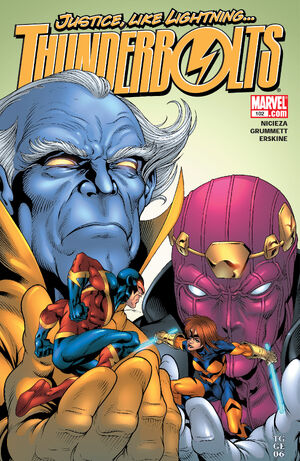 Anyone can crush a body, but crushing a spirit... that's when you know you've really won.

Joystick vs. Speed Demon in Round One of the Guardian Protocols! Why have so many Thunderbolts agreed to Zemo’s plans? What role does the Grandmaster and his “Squadron Sinister” play in the gambit? And can there be anything worse than having the fate of the universe lie in the hands of Zemo? We’re thinking, yes... but wait until you see whose hands our fate does lie in!

Retrieved from "https://heykidscomics.fandom.com/wiki/Thunderbolts_Vol_1_102?oldid=1464820"
Community content is available under CC-BY-SA unless otherwise noted.