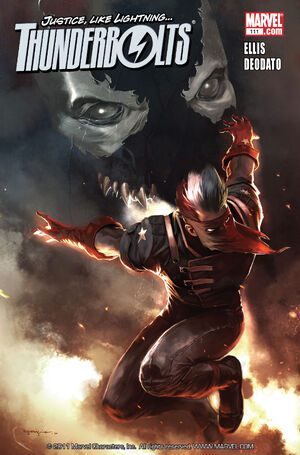 I have an appointment with a Thunderbolts Mountain dock worker for some meaningless sex in two hours, and I do not intend to miss it. I thought I might get him to dress up as Baron Zemo for me.

The story opens with Jack Flag denying arrest by the Thunderbolts. The Zeus lands, and the team walks out. With the media there, Moonstone Decides to put on a show. She orders Radioactive Man to blow up all the cars in the parking lot, knocking Jack down. Jack is attacked by Venom (MacDonald Gargan) and Swordsman (Andreas Strucker). Jack defeats them, breaking Swordsman's sword, then stabbing Venom with it. Venom loses control, nearly killing Jack, but Moonstone activates Venom's nanochain, shocking him. Songbird (Earth-616) flies into the air, but can't see due to the smoke. Jack brings her down with a hubcap. Penance (Earth-616) shoves all of the cars away. The blast also knocks Jack away. Jack tries to run, but is caught by Bullseye (Earth-616). Bullseye destroys the bottom of Jack's spine, saying that he'll never walk again.

Retrieved from "https://heykidscomics.fandom.com/wiki/Thunderbolts_Vol_1_111?oldid=1464829"
Community content is available under CC-BY-SA unless otherwise noted.