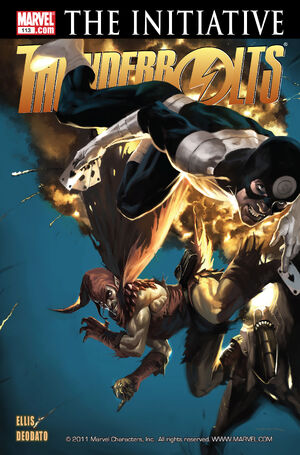 Norman Osborn (Earth-616) Visits Penance (Robbie Baldwin). His cell his empty and dark. Osborn lectures him, trying to cheer him up. He is then confronted by Swordsman (Andreas Strucker). Swordsman tries demanding the status of his sword and clone of his sister. Osborn gets angry threatening to destroy the clone of his sister. Outside, Moonstone talks to Sowrdsman, and she reveals her plan to take over the Thunderbolts program. Cut to American Eagle (Jason Strongbow), where he's fixing up a new helmet. his friend persuades him to talk to Steel Spider. At the same time, Sepulchre is offered a job interview, which she accepts. Back at Thunderbolts Mountain, Osborn gives a briefing about Steel Spider. He keeps accidentally saying Spider-Man. When questioned about it, he gets angry and leaves. At Steel Spider's home, Osnick is fixing a gun to one of his tentacles...

Retrieved from "https://heykidscomics.fandom.com/wiki/Thunderbolts_Vol_1_113?oldid=1464831"
Community content is available under CC-BY-SA unless otherwise noted.