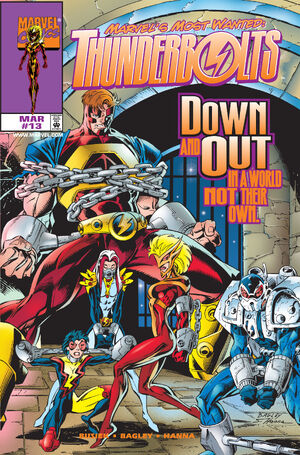 We've got to stick together! It's the only way through this -- anything! We can't just abandon each other! Nobody's sacrificing themselves, and nobody's leaving anyone alone! I've been through that already -- and I don't like it!

Appearing in "In the Courts of Kosmos!"Edit

Synopsis for "In the Courts of Kosmos!"Edit

The Thunderbolts are transported to Kosmos.

Retrieved from "https://heykidscomics.fandom.com/wiki/Thunderbolts_Vol_1_13?oldid=1464750"
Community content is available under CC-BY-SA unless otherwise noted.