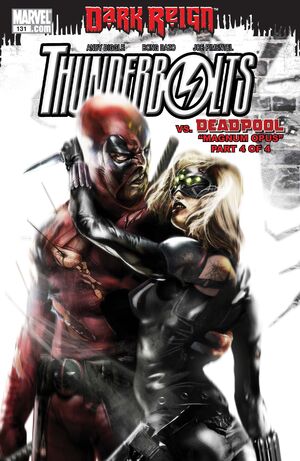 Sh-shot through the heart...AND YOU'RE TO BLAME! Awww, you give love -- a bad name! Daww dawww dada dada dawww dawwww.

The Taskmaster (dressed as Deadpool) was captured and rendered unconscious by the Thunderbolts. Norma Osborn arrives and asks for Deadpool's head. When the Headsman is about to cut it, the real Deadpool arrives and defeats the Thunderbolts with ease. Osborn runs away in a jet with Wilson following him. Black Widow (Yelena Belova) jumps on top of the plane and shoots Deadpool trough the heart. As Wilson sings "You give love a bad name", the Headsman cuts Deadpool's head with his axe. Osborn then orders to burn the head. Deadpool wakes up with his head in its place and with Taskmaster he goes to every ATM in the city with Osborn credit card taking all his money. When Wilson finds out that the Taskmaster wasn't the one that put his head back on, he realized that it was Belova and that she indeed had feeling for him.

Retrieved from "https://heykidscomics.fandom.com/wiki/Thunderbolts_Vol_1_131?oldid=1464849"
Community content is available under CC-BY-SA unless otherwise noted.