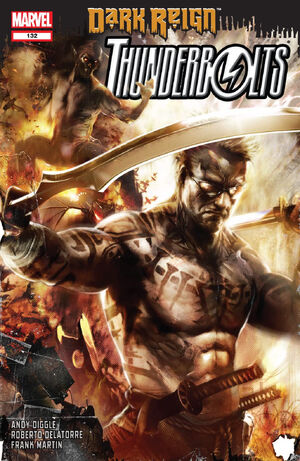 Black Widow is monitoring all activity in the Cube. She listens on the Thunderbolts, excluding Ghost, eat. Ant-Man is anxious to see her eat, which made Paladin and Headsman stare at him. He then changes the subject to ask about Ghost; the others answer that he is shut in his room, taking only army meals. They all consider him weird because of how he keeps himself shut up in his intangibility suit. Also, they question why he is in the Thunderbolts, as he is an anti-corporate terrorist who doesn't care about money. Paladin suggests that Ghost knows something that they don't.

Headsman brings a tray of food of Ghost's door, wanting to thank him to saving him that last time. However, he asks what did he mean, "the second time." Ghost pulls Headsman into his quarters, away from the nearby camera. He asks him if he worked with Osborn before, to which Headsman answers yes, for he tested out the prototype Bat-Glider. Ghost points out that the gravity grip that was suppose to save himself in midair when Osborn threw him out of Air Force One was faulty; he fixed it before the mission. This implies that Osborn intends to sacrifice any of his expendable pawns.

Yelena sees Ghost in his room through surveillance but doesn't see Headsman. Then suddenly, Ghost pops up beside her; that one on the screen was actually a computer-generated image and Headsman is still in his quarters. He warns Yelena not to spy on him or he'll stop her boss' heart in his sleep. As he vanishes, Yelena curses in Russian.

Sometime later, as the Thunderstrike rolls out, Yelena debriefs the Thunderbolts on Mister X, reigning fighting champion of Madripoor. According to S.H.I.E.L.D. files, he is a low-level telepath, able to anticipate his opponent's moves and block them effortlessly; he once beat Wolverine in hand-to-hand combat. He also is a clinical sociopath, who believes that he forms an empathic links to his victims. Currently, Mister X will be attending an opera with Madripoor's ruler, Tyger Tiger. She then says that they'll be sneaking it, pulling out a pair of tights.

The opera starts, as Yelena and Paladin, disguised as ballet dancers, perform on stage. Ant-Man has set up a teleporter up top to transport in weapons. Both Yelena and Paladin grab them and start firing on security, attracting Mr. X's attention. He knocks the weapons out of the Thunderbolts' hands and then disabling them. However, Yelena tells him to drop the act, as all the attendees have left. They then destroy X's body double to cover up his disappearance.

As the Thunderstrikes leaves Madripoor, Ant-Man questions why haven't they killed anyone for real. Meanwhile, X is recruited into the Thunderbolts. The others ask why is even here; X answers that he's not in it for the money, but to find something to kill. However, he warns that if there is nobody worthy of his skills, then he might kill them all.

Retrieved from "https://heykidscomics.fandom.com/wiki/Thunderbolts_Vol_1_132?oldid=1464850"
Community content is available under CC-BY-SA unless otherwise noted.