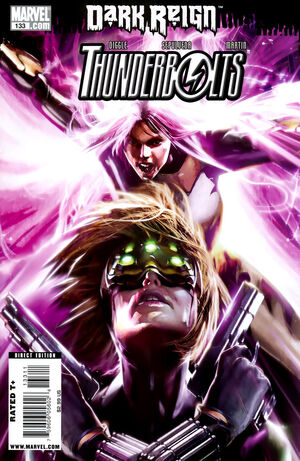 You know Norman isn't exactly a poster child for mental stability. Sooner or later he's gonna lose it, and this thing he's got going is gonna fold like a house of cards. In the meantime, just keep your head down and your ear to the ground, and be ready to jump when it all goes south.

Yelena Belova is exercising in the Cube's gym. Knowing that she's being watched, she calls for Ghost to reveal himself. More over, she finds that it is a perfect time to interview him, to understand his motives for joining the Thudnerbolts, being so secretive. Ghost retorts that he knows she has secrets, causing Yelena to pull a gun to his head; he points out that he will simply let the bullet pass though his head. Yelena reveals that each of his meals were impregnated with a single nanobot, to small to detect. But over forty have clustered to create a small bomb in his lower intestine. All what has to do is say a password and boom he goes, inside his intangibility suit. Ghost tries to rectify his mistake, explaining that it is his intention to unleash a terminal virus once Osborn capitalizes the corporate world that will bring down everything. They reason why he is telling her this is because he wants her to inform her real boss.

In Cleveland, Ohio, H.A.M.M.E.R. is trying to relocate a group of homeless people who refuse to budge. The homeless get angry when an agent hit an old man who had no credentials, giving cause for the agents to kill them all. However, they were all saved when one of the homeless is revealed to be Songbird, who traps the agents in their own truck. Deciding that Osborn has done enough to make, she flies off.

At Avengers Tower, Osborn is meeting with someone called Scourge. He gives his new subordinate a ballistic mask to cover his ruined face. Victoria Hand then informs him that Songbird is confirmed to be alive.

Back at the Cube, Ant-Man has a talk with Paladin, while the latter is doing some target practise. Ant-Man expresses his insecurities over joining the Thunderbolts, for its not the hero life he expected. He wants to leave but Osborn might kill him if he does. Paladin advises waiting for Osborn to crack and lose his mind.

Elsewhere in the Cube, Yelena greets Scourge. She then slips into the armory, communicating with someone over her radio. Apparently, she is a spy in the Thunderbolts. However, she tells her contact that she fears that ghost has compromised her identity, though she feels that she can use him. The person she is talking to is Nick Fury.

The Black Widow is revealed to be working for Nick Fury.
Preview Gallery

Retrieved from "https://heykidscomics.fandom.com/wiki/Thunderbolts_Vol_1_133?oldid=1464851"
Community content is available under CC-BY-SA unless otherwise noted.