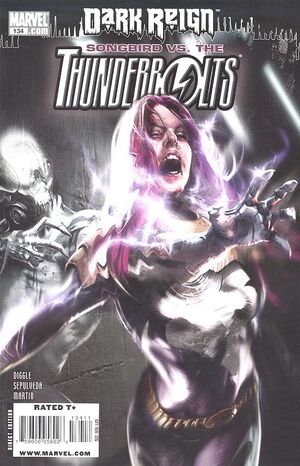 As a Commission on Superhuman Activities facility in Portland (Oregon), Oregon, former Thunderbolts Abner Jenkins, aka MACH-IV and Fixer, are testing the new MACH-V suit. Then suddenly, Songbird crashes in.

At new Thunderbolts HQ at the Cube, Headsman is watching Mister X practise. He tries having a go at the martial arts specialist but loses badly. Black Widow then calls for them to head out. While Mister X's back is turned, Headsman attempts to throw a knife at him, only for it to be caught. He goats Headsman into trying to get it back, but since he did nothing, Mister X remarks that it may come back, even when he least expects it.

Songbird tells her former teammates the corruption left behind by Osborn and it is up to them to make it right. Fixer express his doubts about helping a wanted fugitive, especially since it took a lot of hard work to obtain this job but Jenkins asserts that they must help her and offers Songbird their assistance. She gives Jenkins a good-bye kiss before leaving.

On the Thunderstrike, Widow is talking to Fury regarding the Thunderbolts' latest mission to kill Songbird; Fury states that it can't happen; he needs her info on Osborn's operation; Widow isn't sure that she can do that and maintain her cover; Fury snaps that her cover is as good as blown. Soon as she completes this mission, she is out the Thunderbolts for good. He also asks about the loyalties of the rest of the team; Widow states the Scourge is loyal to whoever is giving orders, Paladin loves being paid and the rest are only loyal to themselves. Then Osborn calls, forcing Widow to terminate the call. She is ordered to remain on observation; Scourge is now team leader.

As Songbird soars, she sees the signature sign of the new Thunderbolts, with the Thunderstrike bearing down on her. She is able to use her powers to knock the missiles right into the Thunderstrike, forcing Widow to eject. However, the explosion throws Songbird right to the ground. Widow then is upon her, holding a gun but then puts it away; Songbird is hesitant to trust her; Widow then reveals that she is actually the first Black Widow: Natasha Romanova.

Retrieved from "https://heykidscomics.fandom.com/wiki/Thunderbolts_Vol_1_134?oldid=1464852"
Community content is available under CC-BY-SA unless otherwise noted.