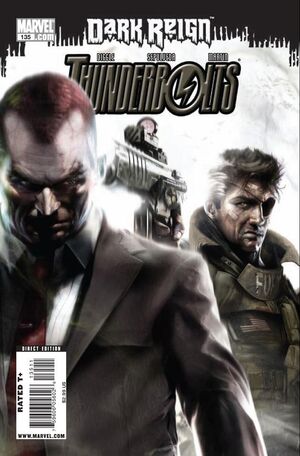 Now...just between me and you, here's my little secret. Here's what it all means... The bad guys always win. Me killing you is just perfect symbolism for the times.

Songbird and Black Widow make their way through an Oregon forest on foot. The former asks how long Widow was a double agent; she answers from the very beginning. She and Fury discovered that Osborn was looking into Yelena Belova, so she went undercover to spy on Osborn's operation. The hardest part was maintaining her cover; Deadpool also owe her his head -- literally. Just then, Mister X jumps in; he knew that something was right about Widow and decides to kill her. Widow attempts to fight back but Mister X deflects her every attack with his swords. However, Songbird hits him with a large sound wall from behind, knocking him through some trees, which was heard by the Thunderbolts. Ghost then appears, having sent his team to the wrong set of coordinates; Widow admits to him that the supposed bomb in his gut was made up. As the two women attempt to make their way, Widow contacts Fury regarding her situation.

Three days later they arrive at Fury Secret Base #20, in Yankee Stadium, where they meet Fury. However, he informs them at they've been followed. Just then, the Thunderbolts break in. Songbird attempts to throw up another sound barrier, Ant Man zaps her from behind.

Next thing they know, Osborn is punching Fury's face. He reveals to Widow that he had known all along who she was and the Fury she thought she was communicating to was actually Osborn himself. He was using her to get to Fury and to pressure-test the loyalty of his team. Now, she will be handed over to Hawkeye/Bullseye to find out where Captain America is; she spits in his face. Osborn furious orders the Thunderbolts to the women away, especially to bring him Songbird's head. He then tells Fury that the "bad guys" always win before killing him. Meanwhile, Widow tries to appeal to the Thunderbolts, stating that they are nto monstersl Mister X slaps her, before Scourge corrects her: they are soldiers who obey orders.

The Fury Osborn killed is actually a Life Model Decoy controlled by Phobos inside.

Retrieved from "https://heykidscomics.fandom.com/wiki/Thunderbolts_Vol_1_135?oldid=1464853"
Community content is available under CC-BY-SA unless otherwise noted.