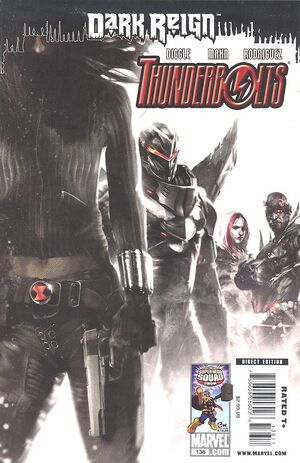 Scourge orders Black Widow sent off for interrogation and orders Headsman to decapitate Songbird. However, Headsman and Paladin are having conflicts with doing this. Thus, the former turns on Scourge, only to find out that he is a cyborg. Scourge and Mister X then respond to kill the deserters. Paladin uses his guns to shoot Widow's cuffs, allowing her and Songbird to escape. Mister X pins Paladin to the wall with his sword in his shoulder. Scourge attempts to pick up a gun, only for Headsman to hack it off. He grabs the axe with his other, ready to execute him., only to be shot in the back by paladin. However, he has no bullets left in his gun to take on Mister X, who goes to finished the job Scourge started. However, his ability to anticipate his opponents move is useless against the intangible Ghost, who shocks him. He then pulls Paladin out. Paladin suggests that they make a run for it but Ghost insists that they do not, stating that they all have reasons for joining the Thunderbolts. He uses an electro-convulsive shock to wipe Scourge's short-term memory, before falsifying what exactly happened. All of this is witnessed by Ant-Man, hiding in a vent.

As they make their escape, Songbird feels so naked with her sonic rig, which gave her her powers. But, as they make it to the surface, Yankee Stadium is crawling with H.A.M.M.E.R. goons. They then steel a M-RAP (Mine-Resistant Ambush-Protected Vehicle) to make their escape. Unfortunately, a chopper blasts them to the side of the bridge. They both make a risky jump from the vehicle, before it is destroyed. Luckily, they are saved by MACH-V, while Fixer takes down the chopper.

Later, Fixer informs both Widow and Songbird that the Fury Osborn shot was a Life Model Decoy.

At Avengers Tower, Osborn reprimands Scourge for letting Songbird, Fury and Widow get away. He demotes Scourge, revealed to be the cyborg Nuke, from his position as Thunderbolts field leader, bringing the real Yelena Belova out of stasis.

Retrieved from "https://heykidscomics.fandom.com/wiki/Thunderbolts_Vol_1_136?oldid=1464854"
Community content is available under CC-BY-SA unless otherwise noted.