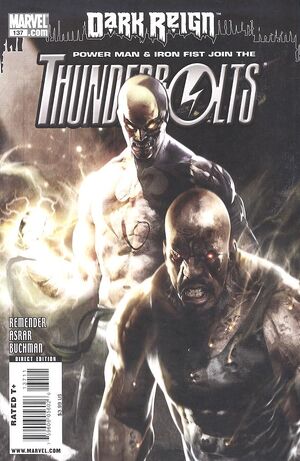 We never know what chain of events we've set in motion as we perform our daily tasks. Wings of a butterfly and all of that. We suit up, show up, screw up. The results of those screwups don't surface for months...maybe years. Breathe in some asbestos on a job site. Twenty years later -- lung cancer. Send a man to jail. A few years later he becomes ruler of the Earth...he uses your best friend to kill you.

The New Avengers break into the Cube to rescue Iron Fist. But once they release him, he turns on them, punching through Spider-Man's chest, slicing Wolverine's head with Captain America's shield and deflects his bullets right through his skull. Only Luke Cage remained, to which Iron Fist could not bring himself to kill his friend, so Cage grants him a mercy killing by snapping his neck. But this was all a simulation in Iron Fist's mind, as he is hooked to machinery to test out how he would react. Osborn demands to the Ghost to find what can keep Rand from not hesitating.

Two days earlier, Danny Rand is in the process of meeting with an investor to further his business interests. But this person is Osborn. Then out of nowhere, Mr. X hits him on the head. Rand is able to fight back, catching Mr. X by surprise because he fight like a drunk. Scourge pops out of the air vent, firing his gun. Rand avoids the bullets and goes to kick Osborn, only for the Ghost to catch him in midair and then drop him out the intangible window. Then, Headsman slams him into a window down below, knocking him unconscious. Osborn then goes out to meet Agent Choi, who was had murdered Rand's assistant Natalie. He orders her to kill Rand's limo driver and anyone he spoke with in the past three hours

In the present, the Thunderbolts are sitting down for military-grade dinner. Ant-Man makes many pop culture reference, which causes an annoyed Mr. X to put his knife to his throat and threatened to cut out his tongue. Iron Fist then sits down, causing the Thudnerbolts, except Ant-Man to leave, downright because they don't trust him, even if he's brainwashed.

Harlem, the next day, Cage is having breakfast at a waffle diner. Then suddenly, his iPod beats, which he presumes to be call from his wife, when actually it is Ant-Man calling, hiding in his waffles, demanding that he cooperates. Cage doesn't take him seriously, until Paladin points a gun to his head and shoots. However, instead of going unconscious as expected, Cage gets up and punches Paladin right out of the diner. Mr. X and Scourge then descend on him. Cage takes out the former, as the bullet scrambled his brain, thus making his thoughts unreadable, before slamming a car on Scourge. Then, Iron Fist turns up, using a chi-enhanced punch to knock him out.

When the Thunderbolts return to the Cube to report the success of their mission, Osborn has Iron Fist help Ghost in brainwashing Cage, so that he could fully use Power Man for his own purposes as promised. Ghost asks what happened after he helped Cage save his daughter, but after noticing a file saying, Project Luke Cage, he drops the subject.

Cage, strapped to a chair with adamantium restraints, threatens to make them pay for what they did to his friend. Paladin blocks the camera, deciding to take his time with the prisoner. Then suddenly, Cage's restraints snap off. He takes advantage of this by slamming Paladin to the ground and escaping into the air vents. Mr. X follows, only to run into the three pumpkin bomb Cage grabbed off Paladin, causing an explosion in the vent. Ghost reports this to Osborn, who presumes that Ant-Man, still inside Cage's body, must have done so and orders the Thunderbolts to kill them both or he'll kill them.

Cage makes it into the kitchen, Ant-Man calls him to send him to a vent to escape to freedom. As he runs down a corridor, small flying disk come at this. One of them manages to scan him, activating a laser grid. Scourge comes out of the shadows, explaining that these lasers are DNA-specific, which would even slice through his unbreakable skin. Disappointed that Cage didn't fulfill his deal with Osborn, he then fires at Cage's chest, causing him to fall back. Cage responds by throwing a disk at him, causing the lasers to reset to Scourge. He then runs from Headsman, ending up in a large pipe filled with rats and a combat-ready Iron Fist standing there. He tries to convince his friend to remember who he is, going far to remind him that he knows about Misty Knight being pregnant. Iron Fist angrily punches him across the face. By the time the other Thunderbolts arrive, Iron Fist is standing over an unconscious Cage. Headsman checks Cage's face up close, only to notice a dead rat by him. Then suddenly, Cage gets up and punches him into the side of the pipe. Apparently, Iron Fist's focused chi was able to cleanse his mind of the brainwashing. Together, the former Heroes for Hire fight against Mister X, using banter to distract him from realizing if he can read two different minds at once. Headsman then makes a comeback, using his anti-grav to slam into Cage. Before he could vertically slice his head,, Iron Fist kicks him of the anti-grav. They then follow the fleeing Ghost, hoping to find Osborn. However, teleportation equipment sends them away.

Later, Osborn reprimands the Thunderbolts for letting the Heroes for Hire get away by deducting a huge amount from their next pay stub. He brings out a file full of falsified documents to lure out any traitors who aided in the Heroes' escape. When no one answers, he leaves. Only Ghost and Paladin remain at the table, where the former reveals to Paladin that Osborn was intending to have them replaced. Paladin was a little ticked off that Ghost didn't tell him that he was setting Cage free; Ghost tells him that he couldn't risk anything--they needed to make the hero program look like a disaster so that Osborn wouldn't salvage it.

Back in Harlem, the Heroes are sitting down for dinner. Cage just came back from the restroom, having heard someone scream. They then talk about trying to find out where the Thunderbolts' base is, so that they can gather their team to take it down. They know that one of the Thunderbolts teleported them out, so therefore, they have an advantage against Osborn. All the while, Ant-Man stealthy sneaks out.

Retrieved from "https://heykidscomics.fandom.com/wiki/Thunderbolts_Vol_1_137?oldid=1501135"
Community content is available under CC-BY-SA unless otherwise noted.