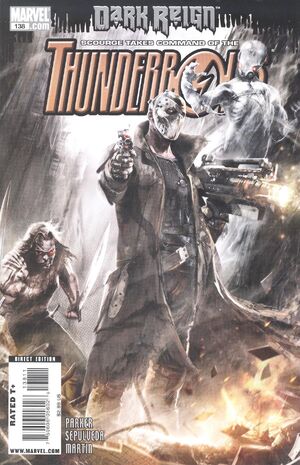 The blood hits the fan in the first issue by new writer Jeff Parker (AGENTS OF ATLAS)! It's been too long since Mr. X has killed, and he needs his next fix! Ghost has taken notice, and sees an opportunity…while Scourge is seeing things that no one should! Add in the selfish intentions of Paladin and Ant-Man, stir with a stick of dynamite and…BOOM! You’ve heard raves about Parker’s ATLAS (heroes pretending to be villains)…but now it’s time to let him loose on some real fiends!

Retrieved from "https://heykidscomics.fandom.com/wiki/Thunderbolts_Vol_1_138?oldid=1728627"
Community content is available under CC-BY-SA unless otherwise noted.