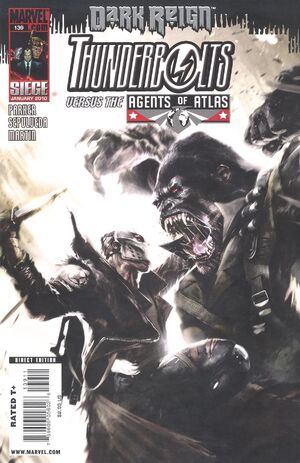 Somewhere over the Gulf of Mexico, the Thunderbolts land to pick up a new addition to their team: The Grizzly, who is to debrief them on the Agents of Atlas. He explains about how well-connected the Atlas Foundation is. He also explains that the inner circle, composed of Jimmy Woo, Namora, Gorilla Man, the Uranian, M-11 and Venus are not to be underestimated.

The Thunderbolts arrive at an Atlas base in Louisiana, which even the inner circle doesn't know about, which makes chemical warfare agents. Ant-Man and Ghost infiltrate the compound, before the former plants explosives that destroy the base. Just after, Ghost injects Ant-Man with an antidote that would protect him against the flesh-eating chemical in the air. He asks everyone else to join in, even though it is using the same needle, if they trust him. Just then, the Agents' ship arrives, the Agents can tell they are on Osborn's payroll. Venus immediately uses her mesmerizing singing to entrance the Thunderbolts; only Grizzly, who is wearing earplugs, is immune. However, Scourge sees women from his past who turn undead, scaring him. He fires indiscriminately, nearly hitting Venus. Grizzly thanks Scourge for shrugging off the effect. Then, out of nowhere, Namora punches Scourge, before ripping a tree out of the ground to hit him with, Paladin fires a heat ray only to be slapped away. Mr. X fires at point-blank range to her face, before dodging every blow set against him. However, he didn't anticipate M-11, who wraps its extendable arms around him before shocking him after he insults Gorilla Man. Headsman bumps into Gorilla Man before attempting to free X, only to hit a forcefield and then Namora slams into him.

Scourge, confused at their losing battle, he questions why Osborn would sent them out like this. His hallucinations then tell him that he's simply expendable.

Gorilla Man holds Paladin in a neck lock and demands to know why he is working for Osborn. Ant-Man is watching this and figures that it is the perfect opportunity to escape. As the Agents round up the Thunderbolts, the Uranian informs them about the chemical agent around them. Before he could figure out an anti-virus, Scourge swallows a red pill and then uses one of X's swords to spill Uranian's guts out.

and next appear in Incredible Hercules #139.

Retrieved from "https://heykidscomics.fandom.com/wiki/Thunderbolts_Vol_1_139?oldid=1464857"
Community content is available under CC-BY-SA unless otherwise noted.