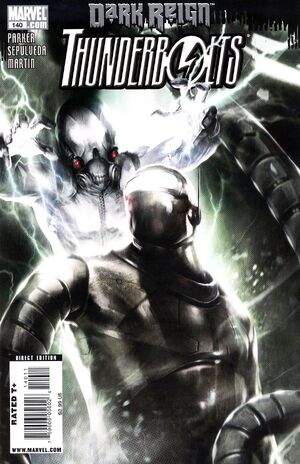 The tide has turned for the Thunderbolts, who were fighting a losing battle with the Agents of Atlas, just as Scourge slices the Uranian's guts open. An angry Jimmy Woo attempts to kill Scourge for that, only for Mr. X to kick it out of his hands. Gorilla Man attempts to kill Scourge himself, only to be pulled away by Grizzly, who is delighted at his chance for revenge and flings Gorilla Man away. Namroa tackles him for that, but suffocates from the deadly chemicals around them, giving Paladin an opening to hit her with his heat gun. X then knocks him out of the way of M-11's death ray, before Headsman makes a comeback. All this is viewed by Ant-Man, who is frantic that his chance to escape was ruined.

Venus finds the Uranian's body and lets out a cry of sorrow. Each of the Thunderbolts, except Ghost, who had his audio receptors on mute, were affected and experiencing their worst memories or fears. For Headman, he is reminded of his childhood, when his elder brother Cody got rid of their dog Duke; Paladin feels the guilt of being a gun-for-hire for Osborn; Grizzly is mawed by a monstrous Spider-Man, who decides to finish the job; X sees himself easily bested by Wolverine; Scourge sees his greatest fear, a world without war; and Ant-Man relives his memories of leaving his girlfriend and child. Meanwhile, Ghost phases through M-11, disabling the complex robot.

It is then revealed that the Uranian wasn't killed, but had actually projected a mental illusion, all the while investigating Scourge's head. As the toxic chemicals start to take effect, the Uranian tells everyone to get back in their saucer. However, he and Woo first goes into Scourge's mind, where they subtly brainwash him into killing Osborn when he sees him.

As the Thunderbolts recover, Ant-Man tries to make a run for it, believing that they would think that M-11 had disintegrated with him. Unfortunately, he runs into Headsman, who is just waking up and reminiscing over his brother. He expresses his hopes that they could see him after this mission.

As the Agents' saucer flies away, the Uranian has everyone immersed in a bath to cure them. Then suddenly, he detects Ghost, who had stolen aboard and studied their technology. He escapes before he could be captured. Ghost then skydives down for another mission.

As the Thunderbolts return to the Cube on Zeus, their pilots informs that there is an important message from Osborn. Displayed holographically, Osborn informs the Thunderbolts that there is an important assignment he needs them to do in Broxton, Oklahoma, but doesn't disclose the details. Upon seeing Osborn's face, Scourge's programming kicks him and attempts to shoot. The bullet goes right through the hologram and hits Headsman right in the head, horrifying his teammates.

Retrieved from "https://heykidscomics.fandom.com/wiki/Thunderbolts_Vol_1_140?oldid=1464858"
Community content is available under CC-BY-SA unless otherwise noted.