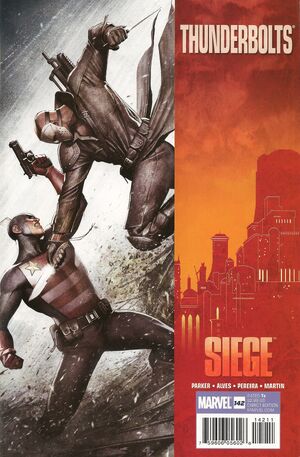 SIEGE BLOCKBUSTER TIE-IN!! As the Mighty Avengers clash with the Thunderbolts in the Siege of Asgard, surprises abound. What are everyone’s true motivations, and when push comes to punch, where do their loyalties lie? Will this most twisted version of the team produce any heroes— or will the Thunderbolts’ tradition of redemption get stomped into the muddy battlefield that is The Siege?

Retrieved from "https://heykidscomics.fandom.com/wiki/Thunderbolts_Vol_1_142?oldid=1658090"
Community content is available under CC-BY-SA unless otherwise noted.