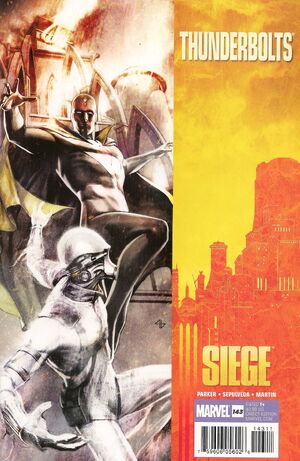 SIEGE BLOCKBUSTER TIE-IN!! Round three of Thunderbolts vs. The Mighty Avengers! Here at the end of SIEGE, everything set in motion by Norman Osborn comes to a fiery resolution—like his prime black-ops force! It’s the cataclysmic end of an era – that sets the stage for the next big chapter of the most unpredictable book ever!

Retrieved from "https://heykidscomics.fandom.com/wiki/Thunderbolts_Vol_1_143?oldid=1737985"
Community content is available under CC-BY-SA unless otherwise noted.