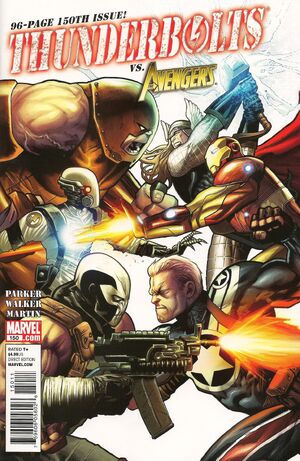 Iron Man, Thor and the original Captain America guest-star in this 96-page 150th blow-out issue! First, in the 40-page lead story, The Thunderbolts reach their milestone as loudly as possible, when the golden figures of the Marvel Universe come to their gray world--none other than the Armored Avenger, the God of Thunder and the Super-Soldier! Thor has come to hold court with one of his people held in the women's wing of The Raft, and when his fellow Avengers join him, things go to a realm no one expected! Iron Man comes face-to-face with Ghost, the man who almost killed him, and Steve Rogers confronts the man who did kill him, Crossbones! Plus: character bios, key reprints and more surprises in the book that has IGN.com exclaiming: “Parker and Walker are injecting a bit of fun and excitement into the title…This is the most consistently enjoyable title with the Heroic Age banner and anyone looking for a great team book would do well to give Thunderbolts a read.”

Retrieved from "https://heykidscomics.fandom.com/wiki/Thunderbolts_Vol_1_150?oldid=1728725"
Community content is available under CC-BY-SA unless otherwise noted.