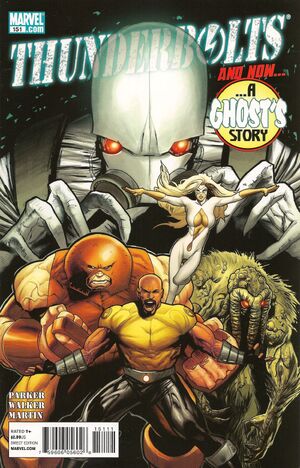 Come sit by the fire and prepare to be frightened...we're going to tell you a "Ghost Story! The Thunderbolts own psychologist, Moonstone, peels back the layers and delves into the mind and past of the brilliant and mysterious paranoid known only to the world as Ghost! How did his war on the corporate system begin and what made him leave his humanity behind? Even his hardened criminal teammates will be forced to admit that some things are better left unknown. Learn more than you ever wanted to about Iron Man’s fearsome foe in the latest issue of the series that has IGN.com raving: “I can't recommend this book enough--you need to be reading THUNDERBOLTS."

Retrieved from "https://heykidscomics.fandom.com/wiki/Thunderbolts_Vol_1_151?oldid=1652699"
Community content is available under CC-BY-SA unless otherwise noted.